"The Red Scarf" by Gil Brewer

"About eight-thirty that night, the driver of a big trailer truck let me out in the middle of nowhere. I had stacked in with a load of furniture all the way from Chicago and I should have slept, too. I couldn’t even close my eyes." 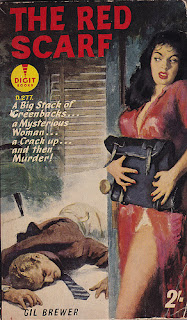 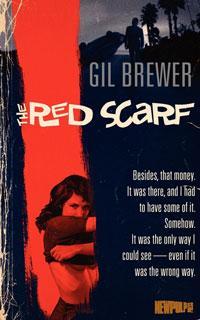 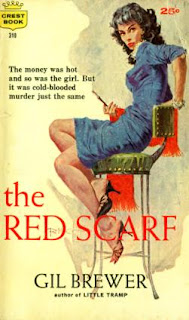 Roy, desolate at failing to get a loan from his brother, is hitching his way from Chicago to Florida.  He and his wife, Bess, own a motel in which they sunk all of their chips.  They are riding out the hope that a new highway would be located an built fronting the motel.  Word is the new highway will be re-located, leaving their motel a stranded money pit.

"The sign was done in blue lights and it kind of hung like a ghost there in the dripping trees. It swung and you could hear it creak. Just the sign, and nothing else.”

In Alf’s, Roy bums a ride from a shady looking couple, Vivian and Noel.  He quickly realizes he is stepping in the middle of a hornet’s nest.

"I sat there without saying anything for about a mile. Just waiting. It wasn’t the cigarette smoke in this car, or the hot air from the heater, either. You could taste the trouble that had been going on between these two."

There is an accident and soon Roy finds himself face to face with a pile of cash, bucks that could solve all of his problems with the motel.  Vivian refuses to explain where the cash came from and begs Roy to help her get out of the country.  Its obvious to Roy that the cash is blood money of some kind and that Vivian is on a lunatic run from big trouble. She carries the money in a case secured by a bright red slash - her scarf.

Soon Roy is hiding Vivian out in the motel and dodging questions from his wife.  Brewer relentlessly tightens the screws on Roy, and ratchets up the tension for the reader.  Roy must somehow dodge Bess and keep Vivian from blowing his chance at that money.

"I left her standing there and cut around the other side of the garage. She worried me plenty. I heard her walking the other way on the gravel. It wasn’t good having her here. I had to keep elbowing out of my mind who she really was, the things she’d been mixed up in, and the people she knew. But that money kept chewing at me."

Complications continue to mount as a strange man starts asking for Vivian and the cops come sniffing around.  Roy madly tries to keep all of his balls in the air, desperate to get away with a scheme that is obviously impossible to carry off.  Brewer treads familiar ground, telling a simple story about a man that knows he is treading a doomed path, but can’t break himself away from the false hope that lies just ahead.

While all of Brewer’s novels are good, there are those that sit on a higher tier than the rest.  The Red Scarf is one of those.  Brewer was at his best when he kept both the plot and the writing simple.  The writing in the The Red Scarf is tight. He crafts rapid-fire sentences, which hit like quick jabs to the nose.  The story plunges forward, like a roller coaster headed for a brick wall.

Thanks to New Pulp Press, The Red Scarf is readily available in a handsome re-published edition.  As Dr. Steve Brule would say, check it out.
Posted by P.M. at 7:50 PM