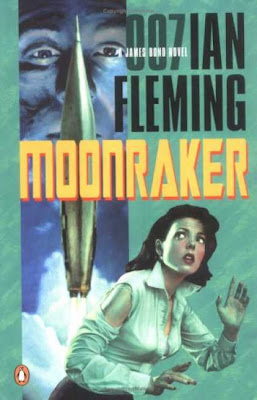 It was the beginning of a typical routine day for Bond.  It was only two or three times a year than an assignment came along requiring his particular abilities. For the rest of the year he had the duties of an easy-going senior civil servant . . . .

The first part of Moonraker gives us a glimpse into an ordinary day at the office for Bond.  The films would leave us to believe that there is no such thing.  Rather, Moonraker explains most of Bond’s time is spent in the office reading boring intelligence briefs, followed by cards or cocktails in the evenings and high stakes golf on the weekends.

M breaks Bond out of one of these routine office days with a curious question about an English celebrity, Sir Hugo Drax.    Drax is very wealthy and a war hero.  After the war he made a fortune in metals trading.  Now he is on the cusp of becoming an immortal British hero, having developed a super atomic rocket with a range to cover all the major capitals of Europe, the Moonraker.  Despite Drax's success, M is troubled about a recent discovery:

“That’s about it,” he said slowly. “I don’t’ know much more than you do. A wonderful story. Extraordinary man.” He paused, reflecting. “There’s only one thing . . .” M tapped the stem of his pipe against his teeth. “What’s that sir?” asked Bond. M seemed to make up his mind. He looked across at Bond. “Sir Hugo Drax cheats at cards.”

Turns out Drax has been playing high stakes bridge at M’s club, Blades and has been on a very unlikely streak of luck. M enlists Bond and his card skills to find out how Drax is cheating.  Nobody can understand why a man in Drax’s position would risk ruining his reputation through card sharping at one of London’s most exclusive clubs.  A most entertaining evening at Blades ensues.  The card battle equals or bests the baccarat battle in Casino Royale.

Soon Bond finds himself with a huge wad of cash won from Drax and a new assignment to examine the security arrangements at the Moonraker site.  Bond, along with a beautiful Scotland Yard agent, Gala Brand, soon discovers that everything is not as it seems on the Moonraker project.

Moonraker deservedly is a favorite of many Bond enthusiasts.  It drags just a bit during Bond’s initial days at the Moonraker site, but picks up quickly and keeps taut right through to the fantastic finale.  It would have made a great film, too bad those in charge of Moonraker the film decided to try to cash in on the Star Wars craze instead of sticking to Fleming’s great story.
Posted by P.M. at 9:46 PM 39 comments: