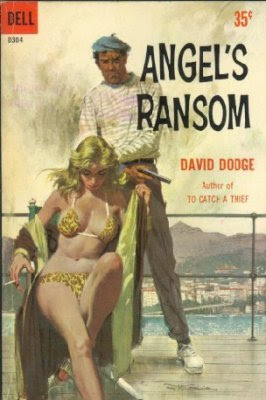 "The girl came running out of the dark, almost on the stroke of midnight. ... From the desperate hurry of the clicking heels he guessed that she was frightened, too frightened to realize that she was running toward a dead end."

Sam Blake is the captain of the Angel, a yacht owned by a rich American playboy, Freddy Farr. The girl running through the midnight darkness is Marian and she claims to be running from an ill intentioned stranger.  Blake provides refuge for Marian on the Angel and then walks her to safety.  Marian leaves her purse behind on the Angel . . . .

The next morning after Freddy Farr comes aboard with an odd assortment of guests Marian returns to retrieve her purse.  More strangers arrive and in a matter of moments the Angel’s captain and passengers find themselves yacht-jacked, while the rest of the crew is stranded on shore.

Some thugs headed up by a viscous little man calling himself Holtz have concocted a plan to steal a chunk of change from Freddy.  The plan requires the yacht to motor off of Southern France while one of the conspirators travels to Switzerland to tap Farr’s account.  A contest of wills erupts between the criminals and the passengers.  Blake is caught in the middle trying to keep his boat and his passengers safe.

"Take a hint, Captain.  You’re going to have a lot of time to be figuring ways and means to get around us. Don’t try it. This job has been figured right down to the last hair. Do what you’re told, steer the course you’re told to steer, and nobody will get hurt."

There is something special about Dodge’s writing in Angel’s Ransom.  There isn’t anything fancy about it.  No attempts at cheesy hard-boiled dialogue. No half-baked attempts to engage in fancy similes.  There is precious little description.  Rather, the story progresses with simple straightforward writing that, despite the lack of description, is amazingly cinematic.  The characters were vivid in my mind as were their actions and the settings.  This kind of evocative yet simple writing requires true talent.

Dodge was a CPA that became a writer largely because of a bet with his wife.  He bet her he could write a better mystery novel than those they were reading during a rainy vacation.  The resultant novel was published in 1941.  He won five bucks from his wife. Dodge went on to write numerous crime/mystery novels and humorous travelogues.  His most famous work is To Catch A Thief.  A couple of his novels were republished by Hard Case Crime and are readily available.

Check out the latest roundup of other "forgotten books" over at Evan's blog.
Posted by P.M. at 9:28 PM 27 comments: