In my last post I noted my oft-scorned opinion that Casino Royale (2006) is the best Bond film.  I ran across an article by Lawrence Meyers which explains, far better than I ever could, why I am such a fan of Casino Royale.  He writes: 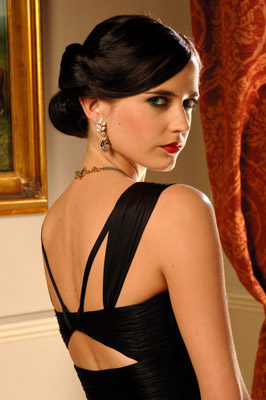 For viewers longing for the traditional Bond trappings involving Q, gadgets, cackling villains utilizing sci-fi technology, and eccentric nemeses like Jaws, let me suggest that they have become anachronistic.  Bond films were always one step ahead of the latest cinematic innovations – whether they be stunts or special effects.  Now, however, every film seems intent on pushing the envelope.   How can Bond compete with Avatar? To survive, the Bond series had to reinvent itself just as Star Trek did.

Rather than go bigger – how much bigger can you get than a car driving through a melting ice mansion? — the logical choice was to strip Bond down to its essence.  The innovations had to be in character, not in special effects or stunts.  This makes perfect sense, given that Bond had previously been more about characterization than character.  Short of seeing Bond’s vulnerability in his doomed love affair with Diana Rigg in On Her Majesty’s Secret Service, or with Sophie Marceau in The World Is Not Enough (a direct homage to the former), he is presented more as icon than human.

Given the shift in action (and horror) film aesthetics towards presenting material more realistically, and that the reboot’s intent is to examine how Bond developed into the more iconic character we know and love, the new milieu is entirely appropriate.  We would naturally expect him to be rough around the edges and undisciplined.  That approach alone calls for a removal of the expected Bondian elements.

The rest of Mr. Meyers' article may be found here.  Although I do not entirely agree with his high appraisal of Quantum of Solace, I very much agree that the Bond character needed to be stripped down to its essence.  The silliness of the Moore and later Brosnan films needed to be left far, far behind.  I thought Casino Royale did this and Craig delivered a Bond closer to Fleming’s Bond than had been seen in many years.
Posted by P.M. at 11:56 AM