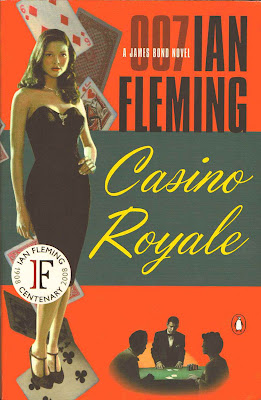 When, dazed and half-conscious, he raised himself on one knee, a ghastly rain of pieces of flesh and shreds of blood-soaked clothing fell on him and around him, mingled with branches and gravel. Then a shower of small twigs and leaves. From all sides came the sharp tinkle of falling glass. Above in the sky hung a mushroom of black smoke which rose and dissolved as he drunkenly watched it. There was an obscene smell of high explosive, of burning wood, and of, yes, that was it - roast mutton. . . . Bond felt himself starting to vomit.

What strikes me about the literary Bond is his humanity.  Fleming allows us to see inside his head, to share his thoughts which, yes, include even self-doubt.  Bond seems a real person as opposed to the robotic superman too often portrayed on the big screen.

I have very little experience with the Bond novels, having only previously read On Her Majesty’s Secret Service.  On the other hand, I have seen every film multiple times - some more than I can count.  I have long felt that I investigated the real James Bond.  Once I saw the superb covers on the Penguin Ian Fleming Centenary editions, I knew the time had come.

The opening lines of Casino Royale are often quoted and even memorized by fans, and justifiably so:

The scent smoke and sweat of a casino are nauseating at three in the morning. Then the soul-erosion produced by high gambling - a compost of greed and fear and nervous tension - becomes unbearable and the senses awake and revolt from it.

Casino Royale involves Bond's efforts to take down Le Chifre, an associate of the Soviet's SMERSH organization, by financially ruining him at a high stakes baccarat  game. Bond’s baccarat showdown with Le Chiffre is gripping and the reader is able to easily follow the action given Fleming’s remarkably simple explanation of rather complex casino game.  It’s a better choice than the film's Texas Hold-Em.  In fact, Casino Royale is riveting from start to finish, slowing down only just slightly toward the end when Bond escapes to the countryside with Vesper.  This slow-down makes the ending perhaps even more affecting.  This is an ending that is far superior to the film's overblown Venice finale.  Vesper stands at the head of the Bond girl class as far as I’m concerned- either in print or on film.

If you haven’t read Casino Royale - do it now.  If you haven’t seen the film - watch it.  I can’t yet say it’s the best Bond novel, hard to imagine them getting much better.  It is the best Bond film.  That’s right, I said it and I’m plenty use to catching shit for saying it.
Posted by P.M. at 8:32 PM