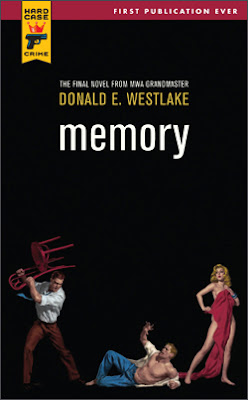 Glen Orbik’s wonderful cover tells all you need to know about the beginnings of the nightmarish journey documented in Memory.  Actor, and erstwhile seducer of married women, Paul Cole, awakens in the hospital after his collision with the chair.  He is disoriented and confused, with a highly dysfunctional memory.  From the moment of that awakening, the reader is placed into the Cole’s shoes, sharing his thoughts, fears and general consternation with the nearly unnavigable world in which he finds himself.  Herein lies the principal brilliance of Westlake’s work in Memory.  We are not simply told what happens to Cole, we co-live it with him.
The story follows a relatively simple arc in which Cole’s day-to-day travails are documented.  A nasty police detective forces him to leave the town in which he is injured.  Surely, there is a clandestine motivation behind the detective’s actions - what was it?  Later, in a new town, he is picked up by the police and treated to a terrifying interrogation.  Once again, surely something big, but hidden, is afoot- what has Cole done?
Every effort Cole makes to re-connect with his old life and reclaim his memory ends in tragedy.  He simply can’t understand what motivates the people around him and causes them to react to him so strangely and with such hostility.  Surely, at some point, Cole will finally find the key that will unlock the mysteries surrounding his situation and allow him to fully understand the links in the chain of his misfortune.
For the reader, the feeling that a big event looms on the horizon grows.  The novel must be about more than Cole’s simple and depressing daily struggle with his condition.  Some kind of a catastrophe will reveal the source of Cole’s nightmares.  Something will either restore Cole’s memory or definitively end his small lingering ability to retain an identity.  Is the big event pages away or is the reader now thinking like Cole?
Although I have a copy of the print edition of Memory in my Hard Case Crime collection, I was very fortunate to find an audiobook copy at my local library.  The BBC Audiobooks America edition is read by Stephen R. Thorne in an amazing performance.  Thorne’s voicing and characterization of Cole is masterful, and his work with some of the other players is amusing and engaging.  Difficult to say whether my reaction to the print edition would have been different, but I was completely enthralled by Memory. Paul Cole will not leave my memory anytime soon.  This is one of the heaviest works in the Hard Case canon.
There are also excellent  BBC Audiobooks America versions of Parker novels read by Thorne.
Posted by P.M. at 4:35 PM 20 comments: 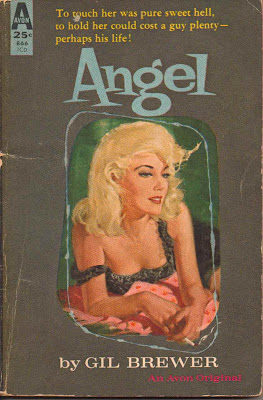 Nick Gavin had come to see his old friend Fred Westfall.  Fred called him talking about trouble, needing help.  Now Nick is standing in Fred’s front yard with a gun in his hand.  Fred ... Fred is dead man, lying at Nick's feet. Looks bad for Nick as the cops pull up, siren wailing.  Fred’s wife, Angel, watches as the cops haul Nick away.  Nick sees two shadowy figures escape in the darkness.

Nick is grilled by the cops but they eventually have to let him go after parrifin tests show that he didn’t fire the gun.  Nick immediately sets out to investigate what happened to Fred.  Soon after being released by the cops, Nick is waylaid by some thugs who beat him up and torch his car.  It’s a warning, they want him to leave Fred’s death alone and get out of town. Despite the beating, Nick manages to pull himself together and continue his investigation.

“Coming awake, I felt sticky but rested, though aching in body and head.  I dug up some eperin-codeine tablets I kept on hand and took four of them. By the time I finished getting dressed and having another slug of whiskey, all the pain was gone and I floated about an eighth of an inch above the floor.  Whiskey and codeine turned out to be a perfect route to unconscious wakefulness.”

Nick visits Fred’s brother Owen, a boat dealer.  Owen tells him that Fred deserved what he got, that he was involved in the theft of several of Owen’s boats.  Fred was the Cain to Owen's Abel.  Owen accuses Nick of being an accomplice and tells him to get lost.  Nick has some doubts about Fred but just can’t convince himself to believe Owen.

Eventually Nick feels the heat is off enough to question Angel, and probe her he does.

“She was wearing scarlet, and she was slightly high. It seemed as if everything about her was a stark rebellion against any show of sorrow over the death of her husband. But scarlet or high, Angel Westfall was still a picture to behold.  Irregardless, as they say. It was one of those Chinese-type dresses, with a high slit and it fit her like a glass around a strong drink.” 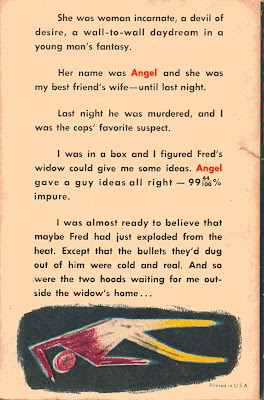 Angel is a mad-woman and Nick becomes convinced of Fred's innocence.  He eventually finds himself in the middle of a complex criminal scheme and he has to navigate treachery, death and the cops while trying to unmask Fred’s killer.  At 96 pages, Angel is short. Brewer easily holds the reader’s attention with some of his better quick hard-boiled prose.  I was pleased that the story didn’t become too much of a typical “man wrongfully accused” tale, of which there are way too many among my stack of PBOs.  Rather, Angel stayed tightly focused on the central characters and Nick’s investigation.  A lightning quick and hard little noir, Angel is worthy of your attention if you're lucky enough to run across a copy.
Posted by P.M. at 8:20 PM 23 comments: