"Quarry In the Middle" by Max Allan Collins 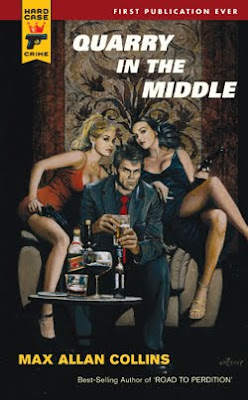 “Feed lettuce to the bunny and eat the bunny.” - Dashiel Hammett

“In a mad world, only the mad are sane.” - Akira Kurosawa

“An assassin can display a sublime altruism.” -Sergio Leone

Collins begins Quarry In the Middle with these quotes from masters of the man-in-the-middle tale.  This Quarry adventure takes place at some point in the middle of Quarry’s career.  He has split with the Broker and has taken to stealing his business by informing the Broker’s marks of their impending deaths and offering to take care of the problem - for a fee of course.

Quarry follows one of the Broker’s hit-man employees to a sleazy little casino town on the banks of the Mississippi, appropriately called Haydee’s Port.  There he discovers the hit-man’s target is Richard Cornell, the owner of one of two rival casinos in Haydee’s Port.  Quarry strikes a deal with Cornell and eliminates the Broker’s hit-man.  Cornell also hires Quarry to investigate who wanted him dead.  Eventually Quarry finds himself in between Cornell and the owner of the rival casino.  Quarry, to a certain extent, plays one side against the other, angling to walk away with a fistful of dollars.

Quarry in the Middle is full of the humor and action one may expect with any Quarry novel.  In particular there is a fantastic action set piece in which Quarry is taken out onto the river by a couple of thugs who have orders to kill him and dump him.  In well-crafted scene of explosive violence, Quarry turns the tables on the thugs and leaves them floating in the mighty Miss.  Quarry is like an evil James Bond - taking care of business, bedding the ladies and doing it all with style.

Collins’ Quarry novels have been among my favorites in the Hard Case Crime lineup.    It is a major bummer that the release of Quarry’s Ex has been delayed (hopefully just delayed) by Dorchester Publishing’s decision to go all digital. Anybody have one of those advanced reading copies they want to unload?
Posted by P.M. at 10:41 AM