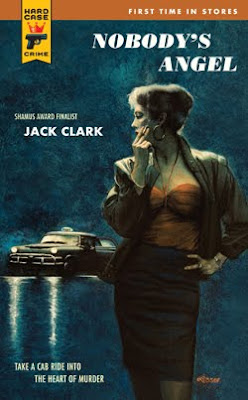 Ever wonder what it would be like to get behind the wheel of a cab in a large and frenetic city?  Look no further, Nobody’s Angel takes us right into the harrowing world of Chicago cabdriver Eddie Miles and provides a detailed and fascinating view of what its like to turn a buck navigating the stygian nightmare of Chicago in a cab.  Eddie’s Chicago, which very likely does not consist of much, if any, fictional embellishment, is a  jungle of crime-ridden housing projects, crumbling and abandoned industrial centers and even entire neighborhoods laid to waste and never reclaimed.  Eddie carefully navigates this urban nightmare where everyone, it seems, is either predator or prey.  Any cabbie with sense carefully travels between the City’s islands of rich neighborhoods while employing all manner of tactics to avoid venturing off the carefully beaten path and into the nightmare.

Clark gives the reader a primer on all things related to life as a cabbie in Chi-Town, right down to quotes from the municipal code.  We are taken along on his nightly journeys and share his heartbreak and nostalgia for the lost City he loves.  Life in the cab is a constant battle.  Every passenger is evaluated and diagnosed as a threat, a safe fare or a sucker that will pay steep for Eddie’s services.  The stakes are higher than ever as Chicago’s cabbies find themselves under attack by a serial killer.

Interestingly, Eddie finds himself in the middle of a couple of mysteries, including the serial killer matter, but advancement of that plot is not the prime focus of the novel.  Major plot points relating to the mysteries are dealt with in quick and explosive fashion, while the bulk of the novel concerns Eddie’s routine nightly adventures with fares, his interactions with his fellow cabbies, and ruminations on his personal life.  Despite this, the story never became slow for me.  Rather, the novel’s exposition of Eddie’s day-to-day life is what makes it special.   I was enthralled from start to finish.

By the way, in case you are unfamiliar with the origin of Nobody’s Angel: Jack Clark actually is a Chicago cabbie that wrote the novel in his spare time and even paid to have copies printed up himself, which he then sold to passengers.  He convinced Charles Ardai of Hard Case Crime to take a look.  Charles, in turn, thankfully made it available to those not lucky enough to catch a ride in Jack’s cab.  It ranks among HCC’s best.
Posted by P.M. at 12:04 PM