"Satan Is A Woman" by Gil Brewer 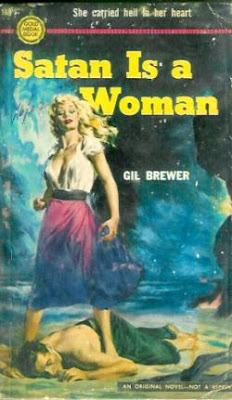 Satan Is a Woman was Brewer’s first title for Gold Medal and he was writing in top form.  Brewer’s best novels are based upon a similar motif - the lead character’s blind obsession with a rotten but irresistible woman.  In Satan Is a Woman, this motif is set against a background and sub-plot that is actually quite compelling and adds a richness that some of Brewer’s similar stories lack.  At its core, Satan Is a Woman is actually a story about two brothers and their attempts to save each other from themselves.

The story begins with Tad Cole hiding out in his brother Larry’s beach cottage.  Tad is wanted for killing two men.   Larry owns a bar right on the beach, steps away from his cottage.  He makes a decent living and knows he should be content but he can’t escape the feeling that something is missing, he is lonely.  More than anything, however, he wants to help Tad get free from his crimes and start over.  As the police being to narrow their search for Tad around Larry’s beach cottage, Tad decides he will turn himself in and avoid implicating Larry in his crimes.  Tad has a long history of trying to keep Larry from following in his footsteps.  Perhaps the most important piece of advice Tad ever gave to Larry was to avoid fast women and “stick to the beer and pretzels type.”

After Tad turns himself in Larry vows to do whatever it takes to find Tad a good lawyer and help him get out of prison.  Enter Joan, a beautiful blond who breezes into Larry’s bar.  “She was everything I’d wanted. Everything. She was the dream, the last word, the hope. She was it.”

Joan has rented a beach cottage next to Larry’s and the two quickly strike up a relationship.  It’s obvious to Larry from nearly the beginning that something about Joan isn’t right, but he is instantly and hopelessly captivated by her.  Brewer is great at incorporating symbolism of his characters' fates into his stories.  As Larry and Joan take their first swim together:

“Hands circled my ankles and gripped.  I went down, pulled down, knowing Joan was pulling and never realizing a woman had such strength. Down and down. I hadn’t had a chance to get my breath. I was dizzy. Still dizzy. Down, down, down. We were on the bottom.”

The story unfolds with Larry alternately obsessing over Joan and attempting to refocus on his quest to free Tad.  As time passes it becomes more and more clear to Larry that Joan is a rotten egg, if not completely deranged.  Yet the more apparent Joan’s nature becomes apparent the worse Larry is enthralled by her.  Brewer allows the story to develop at just the right pace as we see Larry’s self-destruction begin as a seed planted by Joan which slowly grows and envelops him in a seemingly inescapable prison of obsession. Joan insists that Larry could never provide them with the life they need and deserve with his simple income from the bar.  Slowly but surely she pulls Larry onto the same path that Tad so desperately had kept Larry away from.  Larry tries to fight it, but finds himself unable to resist because of his overwhelming desire for her.

“But all the time I kept feeling worse.  Because it was like returning to some hellish dream. My desire for Joan seemed to mount all the time, instead of decreasing.  Her leg would touch mine, and I’d want her. I’d want her from the sound of her voice, with my back turned. From the touch of her hand. From the smell of her. I would have wanted her just seeing her shoes sitting on the floor, maybe. But being with her meant all the rest of the hell. With more of it to come. And if I touched her . . . ."

While trying to find a lawyer to help Tad, Larry meets a legal secretary, whom Brewer cleverly monikers Grace.  She is a beautiful but simple woman that takes pity on, and a liking to, Larry. One night Larry realizes where Joan is leading him and makes a break for it, running away and falling into a nightmarish drunken odyssey, from which Grace saves him.  By this point, however, it is too late.  In another piece of symbolism Joan and a policeman come and find Larry and pull him back into their world - the real world of crime and punishment in which grace does not exist.  Joan immediately whisks Larry back into her dirty business and within her hellish thrall.

“Her lips were fierce, her tongue lashed like a flame itself, and there was no gentleness, only a wire-tight hunger; a vivid, savage want. And through it all, even against the closed lids of my eyes, I could see the red demonic flickerings of the fire out there in the dump.”

At the novel’s finale Joan is revealed in all of her evil majesty and Larry finally and fully realizes his folly.

“Joan . . . I couldn’t believe what I saw and heard. It couldn’t be Joan. Yet, it was. Her face was a contorted mask, her once golden hair lank and dark against her head. I seemed to actually feel it. All the evil in the world radiated from her face, and the way she held her shapely body, a thing of twisted angles.”

The ending of Satan Is a Woman manages to be surprising, satisfying and, dare I say, even a bit touching.  It ranks among Brewer’s best pieces of work.
Posted by P.M. at 8:15 PM