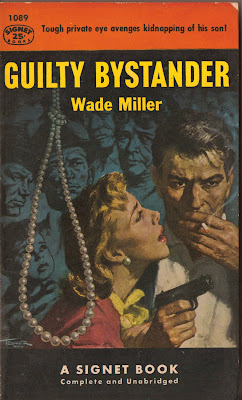 “The room wouldn’t stay still. It kept swinging in slow, creaking circles like a carousel running down. He was lost in a fog - a hot, sticky fog. A voice echoed down an empty street toward him, calling his name. Georgia’s voice. He waited for it to fade away as it always did.”

So begins Guilty Bystander as Max Thursday is awoken from a drunken stupor by his ex-wife Georgia.  Thursday is in the room of the seedy hotel at which he works as a house detective for room and board.  The bottle has cost him nearly everything and he doesn’t seem to care.  Georgia comes to Max in hysterics, having found her son and her new husband missing. She asks her ex for his help, even while half suspecting that he might be involved.

The kidnapping of his son, and some prodding from Georgia, motivate Max enough to sober up and start an investigation.  The hunt takes him all over San Diego, from the bowels of a cargo ship to a crime ridden National City neighborhood.  Max manages to work his way through a complex criminal conspiracy involving mafiosos, some grisly shotgun murders, a trashy femme fatal and a fortune in stolen pearls.  The second half of the novel is fast paced with some great shootouts and a pretty decent surprise ending.  I really enjoyed the San Diego setting, nice change from N.Y. or L.A., especially if you are somewhat familiar with the locations discussed in the book.

I have previously read a couple of Miller novels and I can state without reservation their writing is a step above your typical pulp.  The Thursday series is considered by many to be an excellent but under appreciated body of work, perhaps even ranking up there with the likes of Chandler and Hammett.  I certainly found Guilty Bystander to be a good read, but I’m not ready to proclaim Thursday to be the second coming of Marlowe or Spade. Thursday himself certainly represents a realistic, if not entirely sympathetic or engaging, private investigator.  I have read comments bemoaning Thursdays anonymity in the face of Mike Hammer’s popularity.  Thursday deserves more attention, but not at the expense of Hammer.

Guilty Bystander is good hard boiled stuff, but I don't know that it ranks with the best.  For example, Lt. Austin Clapp, Thursday’s best, and perhaps only friend, speechifies to Georgia:

“Mrs. Mace, I’m tired of hearing about innocent bystanders.  From where I stand every John Doe in this town is responsible for a killer. Killers are made, not born - and who’s responsible?  The public or society or whatever you want to call it.  As long as things like this happen there is no such thing as an innocent bystander.  And that includes you - and me.”

A hard-boiled sentiment from a world-weary homicide detective, but one that’s actually pretty stupid considering the nature of the bad guys and the child victim in Guilty Bystander.  If Thursday’s little boy was something other than an innocent bystander or if society was guilty of creating the novel’s various scumbags, I wasn’t convinced.  Nothing in Guilty Bystander resonated for me at anywhere near the level of many of the better hard-boiled bits from Spillane - like Hammer’s revenge vow in the first few pages of I The Jury.

At any rate, Thursday is not supposed to be an avenging angel tough guy, but more of a tragic noir figure that may or may not save the day. Guilty Bystander is certainly a solid entry among classic pulp P.I. novels, if not quite qualifying as the cream of the crop.  I look forward to exploring Thursday’s further misadventures.
Posted by P.M. at 9:20 PM