Stop This Man! by Peter Rabe 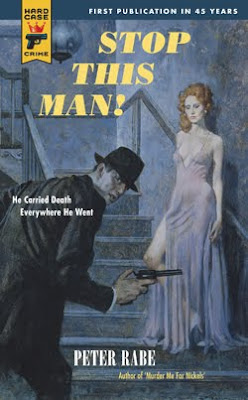 Tony Catell is a professional thief. A buddy tips him off about an easy score - a gold ingot kept in a university lab.  Tony gets the gold, but doesn’t realize that it has been used in an experiment and it is radioactive.  Soon the FBI is on his trail.  He manages to stay one step ahead of the feds, but the radioactive gold he is carrying leaves a trail of sickness and death.

This setup seems gimmicky and dated.  Indeed, the novel starts slowly and the radioactive gold angle doesn’t really capture the imagination.  The gold, however, is just a Macguffin and novel really starts to pick up steam after the first few chapters. What sets Stop This Man! apart from similar cops and robber/cross-country chase novels is Rabe’s excellent characterization.  He allows his characters to think and act realistically and the settings are appropriately seedy.  The dialogue is hard-boiled, but doesn’t seem contrived.  Catell is not too bright and easily manipulated.  He is, however, a very talented thief and not a guy you want to corner.  By the end of the novel I liked Catell and wanted to see him avoid his inevitable fate.

Rabe switches the story between Catell and the activities of the FBI agent trying to track him down.  The portions dealing with the FBI are shorter and, beyond some amusing cop dialogue, don’t add much to the story.  There are a few events in the story that seem tacked on, like Rabe was just trying to add length.  In particular, a chapter or two deals with Catell being waylaid by a hick Sheriff in small-town Arizona.  This isn’t the first 50s crime novel I’ve read that had the story interrupted by just such an event.  Strange . . . .

Peter Rabe cranked out quite a few hardboiled novels for Gold Medal.  Stark House Press has
re-published 8 of his novels.  I’ve read that Stop This Man! is not one of Rabe’s better stories. 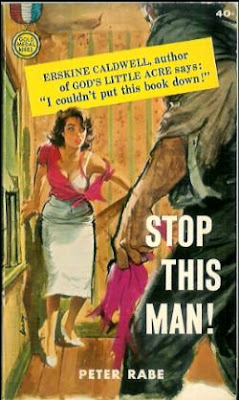 I think it stands above many of its peers, absent the slow beginning.  Perhaps some of Rabe’s other novels are consistently good from start to finish and I am anxious to try out another one.

For a moment the thought made him see red.  A thousand acrid hates rose in his throat.  He closed his eyes, trying to control the fine trembling that crept through his body. He took a harsh breath. Watch it Catell. You’re getting like a lophead taking the cold turkey.
Posted by P.M. at 8:31 PM