"-And the Girl Screamed" by Gil Brewer 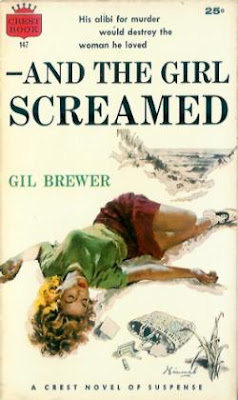 The story begins with our hero, Cliff,  being denied an opportunity to return to the police force because a panel of cops and prominent citizens decide he can't handle a gun after having his arm permanently injured by an escaped convict.  The chief opposition to his return is mounted by Edward Thayer, with whose wife Cliff has been having an affair.  Cliff is despondent at the panel’s decision, his only solace is the knowledge that he is closer than ever to convincing Eve Thayer to leave her husband.  That night Cliff and Eve are on the beach discussing how they can deal with Edward, who has vowed to destroy both Cliff and Eve if they don’t terminate their affair, when . . .

A girl screamed.  It was the damnedest thing I’d ever heard.  It ripped across the soft night, a crazed shriek of pure helplessness and fear.

Cliff and Eve discover a young blond, dead.  They catch a glimpse of the killer and he, perhaps, sees them.  While trying to figure out how to deal with the situation without making their seaside tryst public knowledge, Cliff makes a mistake that will soon make him the prime suspect in the young girl’s murder.

While -And The Girl Screamed employs the very common theme of a man wrongly accused trying to clear his name while on the run from the cops, it is relatively original in its approach and highly entertaining.  Brewer was firing on all cylinders and I rank The Girl up there with some of his best.  I found it far superior to So Rich, So Dead, another man wrongly accused story.

The entertainment value comes primarily from the fact that the killer turns out to be the leader of a vicious gang of high school kids.  Cliff has some violent run-ins with the gang and is nearly seduced by one of the  gang’s 16 year-old female members.  This is the first Brewer novel I’ve come across that incorporates a 50s social scare issue.  If parents don’t pay enough attention to their kids, obviously they will form a hyper-violent and depraved youth gang while hiding it through decent grades and football scholarships.  It's a good thing that all those happy young families in the 50s had novels like this to warn them of the perils lurking in the dark side of suburbia.  I particularly liked the message at the end:

“Something’s got to be done about all those kids.” Andy said.  “Jinny’s dead, and God knows what a jury will do to Roberson.  But maybe if we get the town stirred up enough, get their parents feeling guilty enough, we can help the rest of them. They’re young,” he said “they don’t have to spend their lives this crazy way.”

In all seriousness, -And The Girl Screamed is a damned good read.  It’s not hard-boiled and it has a happy ending, but it is a crime story and those dark noir elements, of which Brewer was a master, show through.  Any fan of 50s pulps should enjoy it, if for nothing more than to learn how important it is to pay attention to the kids.
Posted by P.M. at 8:00 PM