"Up In Honey's Room" by Elmore Leonard 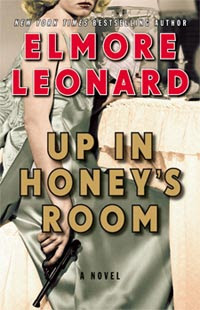 Up In Honey’s Room takes place in the waning days of World War II. Walter Shoen, described as the most boring man alive, is a German butcher living in Detriot. He believes that he is Heinrich Himmler’s identical twin and considers himself a loyal Nazi. He is hiding two escaped German POWs on his farm. Carl Webster is a federal Marshall tracking the escaped POWs. We also meet several other members of an alleged German spy ring including the maniacal cross-dressing Bohdan Kravchenko. At the center of this cast is Walter’s ex-wife, Honey Deal. Honey is a carefree and beautiful blond that seems to instantly seduce every man she meets. Carl enlists Honey to help him get at the POWs through Walter. Carl soon finds himself in a battle with both Honey’s seductive ploys and the ridiculous maneuvering of the spy ring’s hapless members.

Up In Honey’s Room is trademark Leonard from start to finish. It is entirely dialogue-driven - sharply drawn and humorous characters having funny and entertaining conversations. The plot is particularly threadbare and there isn’t much gun play or other action. The spare and somewhat languorous nature of the plot have subjected Up In Honey’s Room to a fair amount of criticism, most calling it a middling entry in Leonard’s catalog, at best. I don’t read Leonard for complex or innovative plots, nor do I expect much action. What I do expect is exactly what Honey delivers, memorable characters that capture and hold my imagination, together with loads of entertaining dialogue. Honey isn’t as rich as Tishomingo Blues or quite as funny as Mr. Paradise, but it immediately captured my attention and I liked the wacky cast of characters.

I don’t have any quotes because I listened to this one on audiobook. Honey delivers a quick, entertaining story. The Carl Webster character was the subject of Leonard’s previous The Hot Kid, which was more favorably reviewed and is next on my audiobook list.
Posted by P.M. at 11:00 AM

Email ThisBlogThis!Share to TwitterShare to FacebookShare to Pinterest
Labels: Elmore Leonard, Novels, Up In Honey's Room