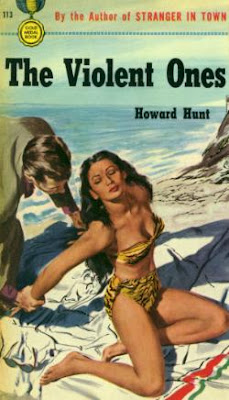 Paul Cameron just finished a stretch in the big house for beating his wife’s lover into paralysis. He is haunted by his wife’s betrayal and by experiencing life behind bars.

He opened his hands slowly and looked at them. They were flushing with blood again, blood that surged back into the pallid, drained palms. Palm. Blood on the Palms. Palm Sunday. Bloody Sunday, when you smashed the taunting face of a devil you hated – Roy Sprackling, who laughed when you learned about him and your wife. The sneering swine who had hit you first and kicked you when you were down; kicked you until you had dragged yourself up and flat-handed the side of the devil’s neck, dropping him to the rug, where he lay bloodily hemorrhaging, and you laughed uncontrollably until people took you away . . . . pg. 6

Now Cameron is on a plane to Paris to see an old friend from the war, Phil Thorne. Thorne called, said there was trouble, he needed help. Soon Cameron will discover that Thorne has been blackmailed into helping a group of communists steal some gold that disappeared during the war and smuggle it out of France. He will find himself in the middle of complex machinations where communists, corrupt police and the women he loved during the war all seem to be one step ahead of him.

He had to bend toward her to hear what she was saying: “. . . never go back to what we used to be. Never.” “No” he said. “But we can take out the good and forget the bad. If we live hard enough for each other, we can forget the past.”

The Violent Ones is a sort of strange hybrid between a detective story, a spy story and a vengeance story. Cameron bounces around France trying to make sense of a complex web of death and deceit. As he fights his way through the maze, bodies pile up and he discovers that the past is just that – the past.

Well she was gone, too. Vanished in the night. The soul’s incredible loneliness . . . He knew that he was lonely, sick to the bone with loneliness that he could counteract only momentarily with the emotional purge that went with brutality. Sometime that need for escape would smother him with its crushing demands, and he would regain consciousness to find that he had killed someone in an extraordinarily savage way. pg. 125

Hunt is adept at setting scenes in one or two lines and at distilling action down to its basic elements. He provides no paint-by-numbers explanations of his plot, let alone his characters' thoughts or motivations. Hunt writes with an economy of words and a wider vocabulary that one often sees in these pulp novels. Sometimes, in fact, his choice of words can spoil the believability of his tale. I can hardly imagine, for example, a grungy detective saying:

“I need hardly elaborate on the fact that you have chosen to insert yourself into a dangerous milieu.”

Although The Violent Ones certainly doesn’t rank among my favorite vintage pulps, I found Hunt's writing style to be quite interesting and I plan to investigate his other work. Howard Hunt, of course, led a most interesting life. Some say he took his spy stories a little bit too seriously. Here is a fascinating account from Rolling Stone. Hard Case Crime just published Hunt’s House Dick.