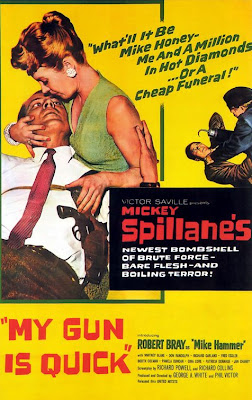 Like the novel, the film begins with Mike Hammer meeting the prostitute “Red” in a dingy “hash joint” and, after a few minutes conversation, offering her some cash that she can use to leave the business and go home. Once again, Red is killed in a “car accident” and Hammer is off to the races.

Robert Bray does a good job as Hammer. I would say that he is neither as mean nor as sophisticated and refined as the Hammer portrayed by Ralph Meeker in Kiss Me Deadly. Bray effectuates a disheveled and hard-charging Hammer, leaving in place the unremitting sense of justice that drives Hammer in the Spillane novels. Some have said that Bray’s portrayal is as close as you get to the Hammer of the novels. I think Bray’s Hammer is pretty close to Spillane’s, but he is a bit too congenial and way too willing to allow the cops to dispense justice instead of his 45.

This may be a function of the story being toned down for the film.

Whitney Blake plays an attractive and well-acted femme fatal. (She is the mother of Meredith Baxter, Alex P. Keaton’s mom on Family Ties). The other roles are also pretty well played.

Overall the film suffers a bit from some slow pacing and a “softening up” of the storyline. I have only read about 1/3rd of the novel, so I am not yet familiar with all of the storyline differences between the novel and the film. I’m pretty sure that the bad guys in the novel were not French gangsters, who always wear cheesy striped sailor shirts. If I recall correctly, the novel is more focused on a high class prostitution ring and corrupt socialites and politicians. I can also make a pretty good guess that Hammer doesn’t just turn the arch-villain over to the cops at the end.

The filmmakers did do a great job with their set design, taking advantage of the Los Angeles setting. The apartments of the prostitutes are unflinchingly seedy and Whitney Blake’s home is almost as sheik as Hammer’s apartment in Kiss Me Deadly. Instead of working his way through the concrete jungle of New York, Hammer must work his way through what was already a maze of freeways in L.A. (I was actually amazed at the size L.A.’s freeways had grown to by ‘57). Although palm trees are occasionally seen, much of the action takes place with dreary back drops of oil rigs, junkyards and docks.

This film is definitely worth a look for dedicated fans of the genre. More casual fans may have a hard time sitting through some of the film's slower moments.

By the way, here is a great little article on Spillane by Max Allan Collins. Collins, who writes some very good novels himself, helped with Hard Case Crime’s posthumous publication of Spillane’s Dead Street.
Posted by P.M. at 11:58 AM