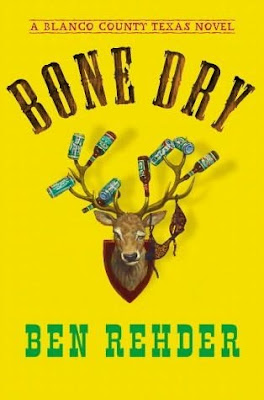 I picked up the audiobook version of Bone Dry more or less at random off the shelf at the library. Accordingly, I wasn’t expecting much. In fact, I didn’t know what to expect at all. What I found was the best humorous crime/mystery novel I have experienced since Elmore Leonard’s Mr. Paradise. Bone Dry is set in Blanco County Texas and revolves around the adventures of the County game warden, John Marlin. On the first day of deer season a hunter’s carefully laid plans are spoiled when a tall blonde goddess walks into his hunting spot, drops her pants and urinates - ensuring that deer will avoid the area. Later, this same blonde dish uses her feminine wiles to disarm and humiliate another hapless deer hunter. Amusing as those events were, Marlin soon finds himself in the middle of much more serious matters. Soon, a hunter is found dead and Blanco County is hit with a crime wave involving murders, missing persons, a hostage stand-off, an attempted rape, a kidnapping and various other mayhem. Rehder creates a colorful cast of characters including a gangster in the witness protection program and his idiot son, environmental activists, a sad-sack federal marshal, an overwhelmed Sheriff, and a pile of clueless local rednecks, including "brush removal specialists" Red and Billy-Don. The novel is persistently entertaining and often hilarious. One of my favorite examples of the dry humor that permeates the story is redneck Billy-Don’s running fascination with figuring out why the newer brush clearing machine he uses is called the “Brush Buster 3000" instead of the older “Brush Buster 2000". What is 1000 better about the new machine? Billy-Don finds the answer to this pressing issue in a most unexpected fashion.
I highly recommend Bone Dry to anybody that is a fan of humorous crime novels in the style of Leonard and Hiassen. Bone Dry provided a good break from the more traditional hardboiled crime novels I spend most of my time with. I will definitely be taking a look at Rehder’s other Blanco County crime novels.
Posted by P.M. at 11:26 AM