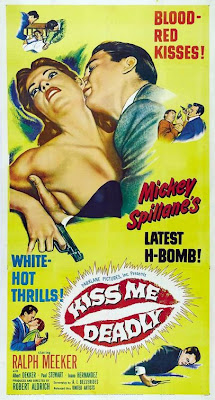 This is a review of the film Kiss Me Deadly, and not the Mickey Spillane novel.

Mike Hammer picks up Christina Baily, a lady hitchhiker who is dressed in nothing but a coat. She claims to have escaped from the looney bin. The lady asks to be dropped off at the nearest bus stop, makes some comments about a poet, criticizes Hammer for his obvious lifestyle and cryptically tells him, “If we don’t make it, remember me.” Turns out they “don’t make it”. Hammer is forced off the road and, we assume, knocked out.

In an absolutely brutal scene Hammer is shown tied down to a bed, while the girl is tortured in the background. The film moves from there to Hammer recovering in the hospital, followed by the police raking him over the coals. Needless to say, after that Hammer is off the races trying to find out who the girl was, who was after her and, most importantly, why she was worthy of so much attention. As he tells Velda, “This could be big.”

I recently caught Kiss Me Deadly on Tuner Classic Movies. Having seen it before, I focused less on following the plot and more on observing the stylization, characterization and the nuances of the dialogue. Two things struck me: First, Kiss Me Deadly has some of the best 1950s chic stylization put on film. Second, it is very hard boiled, especially considering other films of the era.

Many other reviewers and commentators have expounded upon the “hard boiled” nature of the film, so I won’t say too much about it. The story is that the film makers didn’t care for Mickey Spillane’s novel or the Mike Hammer character. Accordingly, they twisted Hammer into a super-sleazy and self-interested slime ball. Next, they morphed Spillane’s story into some kind of a paranoid, cold war, sci-fi scare story. Although not in keeping with Spillane tradition, the changes were not without their merits. There are tough and violent scenes that were very explicit for 1955, including the torture scene previously mentioned. The police, including Hammer’s friend in the novels Pat, regard Hammer with nothing but utter contempt. The seedy neighborhoods and characters that populate Hammer’s world are starkly shown. One of my favorite scenes is when Hammer tracks down Christina’s roommate in a grungy hotel. The whole scene just makes you feel dirty.

I like the Mike Hammer of Spillane’s novels, yet Mike Hammer as a violent and sleazy operator willing to do most anything to turn a buck also is interesting. In the film Hammer lives high on the hog with a sweet pad, sweet car, sweet clothes and, of course, draped with dames. The film makers did a great job capturing where a well-to-do bachelor playboy in 1955 might live, what he might wear and what he might drive. Hammer’s apartment in the film, for example, features what has to be one of the first telephone answering machines. Hammer remains as tough as he is the novels, he just has shadier motives.

Although the nature of the macguffin and the ending of the film seem very strange today, they probably weren’t so far fetched in 1955.
Posted by P.M. at 5:15 PM